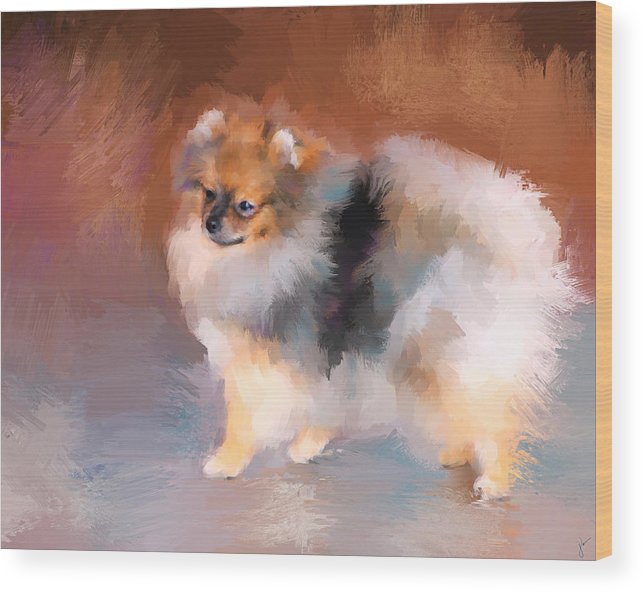 Tiny Pomeranian wood print by Jai Johnson.   Bring your artwork to life with the texture and added depth of a wood print. Your image gets printed directly onto a sheet of 3/4" thick maple wood. There are D-clips on the back of the print for mounting it to your wall using mounting hooks and nails (included).

Tiny Pomeranian - This parti colored Pomeranian is a delightful, tiny dog I met at the local dog show. She was fun and animated, with a delightful, extroverted personality. Poms are compact little dogs who are active and alert with a fox-like expression. They are popular companion dogs and competitive show dogs. They come in all colors, patterns, and variations. The breed's name originally came from the historical region of Pomerania (now present day Germany and Poland). Believe it or not, Pomeranian originally weighed nearly 30 pounds! The breed served as a sheep herder in its larger form. Pomeranians didn't become well known until around 1870, when the English Kennel Club recognized the so-called Spitz dog. In 1888, Queen Victoria fell in love with a Pomeranian in Florence, Italy, and brought the dog back to England, influencing its popularity dramatically. Now this energetic, tiny dog grabs the attention of people worldwide with its happy, outgoing personality and fluffy coat.

I am an artist living in Tennessee, and I love to spend my days in nature enjoying life's most serene and peaceful moments, whether it be landscapes, watching birds and wildlife, or experiencing the beauty of a simple flower. Moving beyond traditional photography, I transform my original photographs into art by pairing them with hand painted textures and backgrounds, appealing to a variety of tastes and decorative needs. Carrying things even further, many of my images become even more painterly via the use of a variety of software applications, as well as hand painting. I hope you enjoy my work. --Jai Johnson Visit my main website at JaiArt.Com Follow me on Facebook Jai Johnson Art You can find my textures at DailyTexture.Com All...